Ventures & Vino: History in the Making with Jesse Katz 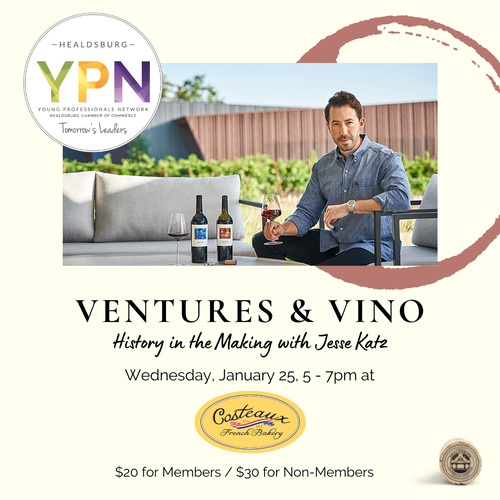 Join the Healdsburg Chamber and Healdsburg Young Professionals Network for an educational mixer at Costeaux French Bakery on Wednesday, January 25. This event will feature a sit-down interview with winemaker Jesse Katz to learn about his rise to success in Sonoma County as a young professional.

T﻿he event will begin at 5 pm with our interview with Jesse and will lead into a 45-minute networking mixer with Aperture Wine and light bites. Tickets are $20 for members and $30 for nonmembers.

T﻿hank you to our sponsors, Costeaux French Bakery, for hosting this great event and to Aperture Cellars for providing the wine!

Jesse Katz is the founder and lead winemaker for Aperture Cellars. Katz’s impressive career has spanned over 22 harvests to date, including his time with Pétrus in Bordeaux, Screaming Eagle Winery in Napa Valley, Viña Cobos and Bodega Noemia in Argentina, and serving as Head Winemaker for Lancaster Estate in Sonoma. In 2013, Wine Enthusiast named Katz as one of its “40 Under 40” Tastemakers and he was also the first winemaker on the Forbes “30 Under 30” list in 2014 along with being named “Winemaker of the Year”. In addition to his work with Aperture Cellars, he is also lauded for his Devil Proof wines, which earned both the first 100-point score in the history of the Alexander Valley AVA and became the first 100-point Malbec from the United States. Katz also stays busy with his many partnerships as a consulting winemaker crafting custom wines for celebrities and athletes among others, initiatives like his record setting $1M bottle charity auction sale, and raising over $5M for various foundations and causes through his wines.